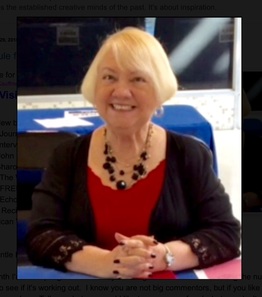 Carol Ann Kauffman has been writing all her life, but in 2011 she decided to self-publish with Kindle Direct Publishing. She is the author of over twenty-five books, and the administrator of Vision and Verse, the Place for Art and Authors.

Her Time After Time Series, featuring Blue Lake, Belterra, The Baslicato, Bentley Square, Waiting for Richard,  Lord of Blakeley, MacKalvey House, Dark Return, and Wait for Me are about a reincarnated couple who keep finding each other, time after time, in different periods of their lives, in different places, and sometimes on a different planet. Everything changes, but love remains the same.

Charming Deception is a story of a woman who wakes up in a strange place with a man who claims to be her husband. But she doesn't remember him. He tells her about their life, but it is not the life she remembers. Is she losing her mind? Or is she the object of an elaborate scheme of deception? And is her charming husband in on the plot?

In Sea Witch, Dr. Laura Martin, Chief Extraterrestrial Life Scientist at The Touchstone Institute of Oceanographic Research, noticed troubling but subtle changes in the Atlantic Ocean. Before she could make sense of it all, her longtime assistant abruptly walked out. Laura hired young, handsome Scott Conner to be her personal assistant. Mayhem ensued, mainly because of Zara, the mermaid/siren/monster in the basement of the Touchstone Institute, who eyed on Scott as her possible mate in a plot for total domination of planet Earth.

“The Touchstone Institute of Oceanographic Research is the most fantastic, exhilarating place on the planet to work. It is high energy, exciting, sometimes maddening, often frightening, heart pounding work. It’s not a job. It’s a lifetime commitment. It gets in your blood. It grabs you by the throat and possesses you, body and soul. And it is work. If you’re not prepared to work your ass off day in and day out, weekends, holidays, your birthday, and your mamma’s birthday, leave now.”

Red Sarah is a story I wrote as part of an anthology called Code Redhead with the authors of Books To Go Now with all author proceeds going to the Children's Cancer Research Hospital for the first year, which is usually when most of a book's sales occur. Because it was so well received, I decided to release it as a stand-alone. Sarah has a special skillset. She's employed by an institute that fixed broken timelines. In this case, Sarah needs to save the Crown Prince of a tiny island nation, whose yet-unborn son will change the world. It is a short, fun read.

Echo of Heartbreak, A Recipe for Life is a short story written in the form of a letter from a very ill mother to her unborn daughter, telling her the incidents surrounding her birth, giving her advice on life, and leaving her the best of her family recipes.

The Captain and the Ambassador tells the story of Ambassador Tull Redmond, who after a long career in intergalactic mediation, is finally going home to Earth. All she wants is a quick ride home.  A long, hot bath. A cup of tea. A good book to read. No drama. Enter Captain Ben Jacobs of the Earth Starship Giuseppe Verdi. Think Captain Janeway meets Don Juan.

The Cat Collier Winter Mystery series is also out on Amazon.com. Meet small town girl Mary Catherine Collier in January Black Ice. See how she starts her own research service in February White Lies. Run to safety with her in March Blues. Help her find a missing friend in April Yellow Moon. Lavender Mist of May, June Green Leaves of Deceit, and July Fireworks Sky continue the story.


Some of these titles are available in paperback, but they are all available now on Amazon.com in Kindle ebook format.
Also available are holiday short stories, Madison's Christmas, Christmas at Star Lake, I Need Christmas, Code Redhead, and A Dilemma for Daisy, published by Books To Go Now, and Through the Darkness, Stories of Hope: A Woman Named Hope published by Articulate Communications, Inc.

Wait for Me
​
​
Echo of Heartbreak, A Recipe for Life

A Dilemma for Daisy

The Captain and the Ambassador